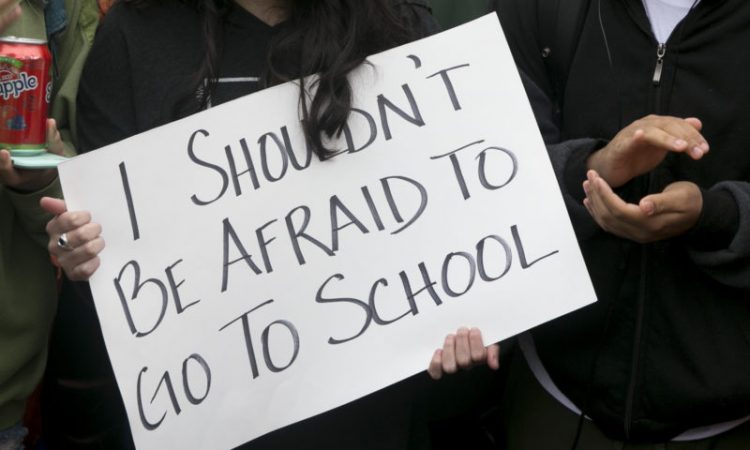 What to do when There is a Fight in the Classroom

Having spent most of the last 20 years serving as an English teacher in various behavioral alternative schools, I can tell you first hand, the short answer is there is no short answer! There are many variables that play a part in what a teacher or substitute teacher should do if a fight breaks out under their supervision. There are a lot of moving parts and often split second decisions have to be made in these situations.  There’s no need to sugarcoat this subject; we all watch the news and are well aware of how fast things can spiral out of control in a matter of seconds in a school setting. Some classroom or school fights are mediocre at best and some can be aggressive and violent. What you do in the first seconds of a fight could prevent more serve injuries to those in fight and also to those student spectators that will try to gather around to watch. So here are just a few thoughts and ideas to take into consideration as a substitute teacher.

Send a Student to get Help.

You can always quickly send a kid to go get help as soon as a fight starts; in my experience, I’ve never had this backfire on me. By doing that one thing you can at least count on some adult backup in minutes. Now keep in mind, many times those minutes can seem like hours when something violent in going on, just mentally talk to yourself to stay calm and remember that help’s on the way.

Use your Classroom Phone

If you’ve got a desk phone in your classroom, think fast and use it! Call the front office and let them know you need help because there’s a fight in your room. In five seconds or less, you can pick your phone up and call someone in the building, and if all you can do is yell into the receiver “There’s a fight,” then do that!

Distance Between Fighters and Student Spectators

Often if two kids don’t have a student audience, it’s easier to talk to them and get them to weigh the pros and cons of a school fight. Now getting some distance between the classroom and the two or more involved in a fight depends on age group of students, size of class, and where the fighters are in relation to the exit. You’ve got to think on your feet! If you’ve got a small class of high school kids and they’re sitting close to the exit door and the fight is on the other side of the class, tell those students that aren’t involved to get out in the hall and send one to go get help. Normally in these situations, you can depend on a student to go get help in the form of another teacher or a nearby administrator.

Keep a Whistle on You

This might sound funny but it helps! If you don’t have a phone in your room and when all else fails, open your classroom door, blow your whistle as loud as you can and scream “I’ve got a Fight!” Believe me when I say this, it works! Depending on where your classroom is in relation to the rest of the campus, you could be in a wing out in the middle of nowhere, so you want to be able to get someone’s attention. A whistle will do just that, especially the bright orange marine safety whistles! And as I write this post I can say that I just spoke with a substitute teacher last week that said she had to use her whistle during a fight; she keeps it in her pocket.

I can promise you that fights among elementary age kids are not going to be near as frightening as seeing older kids fight. When you get to senior guys that play football level, they can destroy a classroom and the only thing you and everyone else can do is get out of the way; you’re outnumbered an undersized. And boy fight are usually not near as fast and scary to watch as those fights between girls. Those boy fights usually involve having fists up in the air like boxers and those girls fight like wildcats, pulling hair, biting, you name it. I tell you all of this because if you can de-escalate a fight before it even starts, it’s definitely to your advantage! If you know two girls, for example, are using threatening words toward each other and are just about to tie into it, get one of them in the hallway as fast as you can. It’s those little things that help the most.

Many ISD school policies now have rules that instruct teachers and substitute teachers to not get physically involved in a fight. In otherwords, don’t try to break it up. This looks and sounds great on paper but often times it’s not realistic or morally the right thing to do. That’s going to be your personal judgement call on what you feel comfortable doing. As a human being, I would have a hard time not helping someone that’s getting serioulsly hurt, and as a teacher I’ve been in situations like that before.

What I’ve mentioned about classroom fights might sound extreme, but they are by for not at all unrealistic. The good news is that most of your days will be fight free. In fact, you may go a whole school year or more without a classroom fight. But as my Dad always told me, “It’s better to be safe than sorry!” So be aware and stay on your toes and thank you for your service to the next generation of minds. And please don’t forget to contact us with any of you subsitute teaching questions are concerns!

“Of all the hard jobs around, one of the hardest is being a good teacher.” ~ Maggie Gallagher

Next ArticleMay I Have Your Attention, Please?

Does your school district use Absence Management® (formerly Aesop®), SmartFindExpress®, or SubstituteOnline® to assign substitute jobs? Check out SubSidekick, a service that sends you text message, email and audio alerts when a job is available for you to accept!